Why STIR/SHAKEN is Important (But Won’t Stop Robocalls Alone) 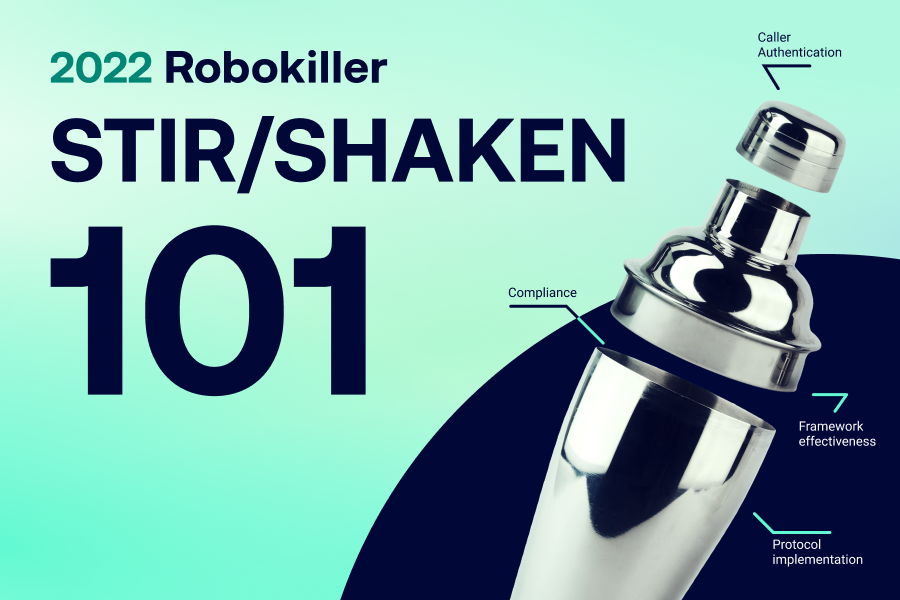 STIR/SHAKEN might sound like something from an old James Bond movie (after all, that’s where the idea came from), but it's one of the most important technological developments in robocall history. In its simplest terms, STIR/SHAKEN is a series of protocols designed to prevent neighbor spoofing, a technique robocallers use to conceal their identities.

However, despite the government announcing the STIR/SHAKEN framework several years ago, we're only just beginning to see its effects — so far, they haven’t been game-changing. This guide will answer the following questions:

The United States has a huge problem on its hands with robocalls. These calls are more than just annoying; they’re dangerous. Here are some facts that you need to know:

Robocalls have been around since the '90s, but they’ve become a massive issue in recent years. As a result, the government took action to fight the problem.

In 2016, the FCC created a "robocall task force," which looked at new technologies that identify spam callers — or, at the very least, provide people with more information about unknown callers. Eventually, the FCC followed up with a new protocol called STIR/SHAKEN. It essentially works like this:

With this additional information, you can do one of the following things:

STIR/SHAKEN won't work without the help of phone carriers like Verizon and AT&T. These companies need to implement the protocol for it to operate. The problem is, the STIR/SHAKEN technology costs money to execute, and some carriers need to invest in innovations for it to even work (such as carriers that serve customers in rural areas). This is why the government introduced new legislation to make carriers adopt the STIR/SHAKEN protocol.

In 2019, President Trump signed the TRACED Act. The legislation mandates that carriers must implement call authentication technologies (like STIR/SHAKEN) or face penalties for non-compliance.

Although some countries — like Canada — had their final deadlines back in 2020, the United States has set different deadlines for different types of voice providers. While most have passed, the final deadline (for smaller providers) isn’t until June 2023.

For years, we've criticized phone carriers for not doing enough about robocalls, and now the government has forced them to take action. However, the ultimate success of STIR/SHAKEN remains to be seen.

How can STIR/SHAKEN stop robocalls?

STIR/SHAKEN authenticates calls by using digital certificates, which provide recipients with additional information about the source of the calls. Carriers that show messages like "scam likely" and "spam likely" warn customers that the person calling might be a scammer. It's then up to the customer to decide what to do with this information.

There are a few reasons why STIR/SHAKEN hasn’t been 100% effective at eliminating robocalls:

While the STIR/SHAKEN framework is a step in the right direction, it's not an all-encompassing solution.

There are other solutions for limiting unwanted calls, but these all have varying degrees of success:

Joining the Do Not Call Registry

The National Do Not Call Registry lets you add your phone number to a database and prevent telemarketers from contacting you. Unfortunately,  the Do Not Call Registry only concerns genuine companies that make outbound sales calls (and other types of calls) and not the illegal robocallers trying to steal your money.

Removing your number from the Internet

This is a good way to reduce robocalls, but it's still not 100% effective. Think twice before listing your number on social media pages, personal websites, and business listings.

Unfortunately, many businesses need to list their phone numbers online to make themselves available to customers, so removing phone numbers isn’t always practical.

Talking to your carrier

The good news is that you can report robocalls to your phone company; the bad news is that there isn't a lot more your carrier can do than implement the STIR/SHAKEN framework. It's always a good idea to notify your carrier if you are having a serious robocall problem so they can investigate.

If you have lost money to a scammer over the phone, you should report the problem to your local police department. However, even if they can help you get your money back, this won't stop robocallers from contacting you in the future.

Unfortunately, none of these options are foolproof. Even if you use all of the above methods, chances are you’ll still receive robocalls. However, with the right technology, you can take back your privacy and make robocalls a thing of the past.

The tech behind (successful) robocall blocking

While inconsistent deadlines and lack of cohesion may be crippling the success of government programs like STIR/SHAKEN, there are ways to crack down on unwanted spam calls and texts from the user side. A dedicated spam blocker app can eliminate these nuisances using cutting-edge technology and active user feedback.

An audio fingerprint is like a regular fingerprint but for a person’s voice. Spam blocking apps that use this technology can detect voice patterns and common phrases used by robocallers, creating an audio ID that can be attributed to the spammers themselves — not just their current phone numbers. When a company that uses audio fingerprints identifies a robocaller, it adds the number to a universal database so the caller can’t harass anyone else. This is one of the most effective ways to reduce the robocall problem.

Call blocking apps prevent calls from reaching you in the first place using predictive algorithms, spam lists, and other technologies to identify spammers and stop them from getting through.

Some call blocking apps are free, while others require a subscription; keep in mind, you get what you pay for. Not all apps are equally accurate, and some provide minimal protection. The best ones come with loads of custom features so you can block calls without stopping genuine people from reaching you.

Revenge of the Answer Bots

If you own a phone, you know how frustrating and annoying robocalls can be. Fortunately, you can get revenge on robocallers with the help of Answer Bots. These bots mimic humans and have a conversation with robocallers for you. They turn the tables on annoying robocallers by stringing them along and wasting their time in hilariously entertaining fashion.

Unlike other call-blocking apps, RoboKiller boasts high-tech spam-blocking features like audio fingerprinting and entertaining robocall revenge in the form of Answer Bots, as well as countless other solutions. With RoboKiller, you can stop the robocall problem for good.

Why RoboKiller is the only solution for spam calls

RoboKiller comes with loads of features for spam protection and call blocking. These features include:

To recap, let’s look at some of the most frequently asked questions about STIR/SHAKEN compliance.

What does STIR/SHAKEN mean?

This combats neighbor spoofing directly by ensuring that callers are signed by the originating voice network and then verified before they can reach the call recipient.

What is the STIR/SHAKEN certificate?

A STIR/SHAKEN certificate is essentially a sign that a caller has been verified — not unlike the blue checkmark on Twitter. These digital certificates allow voice providers to verify that the person placing the call is in fact who they say they are, not a potential scammer using neighbor spoofing to change their number.

While the STIR/SHAKEN protocol does represent a step toward actively fighting the spam problem, it’s far from a complete battle strategy. It depends on not only national but worldwide cooperation, and it may take some time to work out the kinks.

STIR/SHAKEN might get a worse reputation than it deserves, however, partially because people naturally don’t notice the spam calls that are blocked — they only notice the ones that do get through, making it feel like the program hasn’t changed anything. As the protocol matures and everyone gets on board, we’re hoping to see more confident and consistent STIR/SHAKEN attestation and a bigger difference overall.

When did STIR/SHAKEN start?

STIR/SHAKEN was introduced to the public in 2019, but its various deadlines have made for a less-than-cohesive effort nationwide. As all voice service providers finally settle into the framework, we hope a more unified response leads to a more significant reduction in spam calls. Fortunately, you can still use spam blocking apps like RoboKiller to keep yourself safe from spam and scams.

The STIR/SHAKEN framework provides some welcome relief in the battle against robocalls. However, the protocol has limitations. Although it provides people with useful information, it hasn’t done a great job of scaring off the spammers so far. As more carriers roll out STIR/SHAKEN in the months and years to come, we will see if more consistent, unified efforts have a more substantial impact on the spam problem.

‍Click here to try RoboKiller for free for 7 days today!