Why the Do Not Call List Doesn’t Eliminate Spam 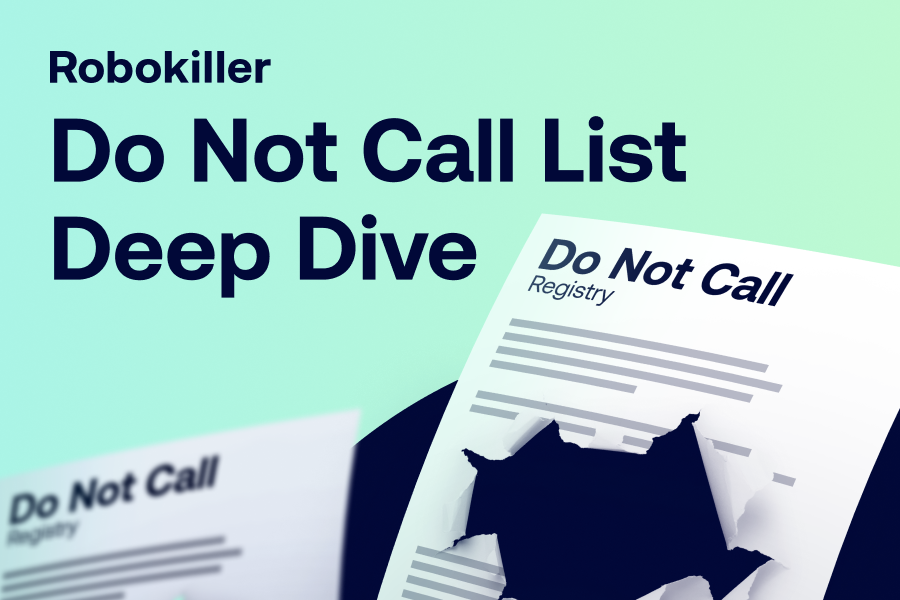 Americans received 6.07 billion robocalls in October 2022, which amounts to nearly 22 unwanted calls for every person in the United States. An alarming 2,269 robocalls arrive every second, and the median amount of money lost to a successful scam is $1,500 according to the Federal Trade Commission (FTC). Perhaps worst of all, these calls continue to increase in number.

Spam calls ring the phones of many Americans numerous times every day, and it may feel like there’s no way to escape unwanted calls. Despite the efforts of agencies like the FTC, the number of unwanted calls continues to escalate and remains the most common complaint the Federal Communications Commission (FCC) receives.

The onslaught of destructive and annoying calls is complicated by the fact so many spam calls originate internationally and fall outside the FTC’s jurisdiction. Given the lack of legal repercussions for scammers operating abroad, squashing these calls often comes down to fighting technology with technology.

Instituted in 2003 to afford people the chance to avoid unwanted telemarketing calls, the National Do Not Call Registry allows consumers to opt out of most types of unsolicited contact. Unfortunately, registering doesn’t eliminate spam calls altogether. Although domestic telemarketing companies must comply with FTC regulations by not calling numbers on the Do Not Call List, overseas scammers have no such restrictions.

So, what do you do if you make money scamming people over the phone, there’s no laws to stop you from doing so, and you want to make even more money? Simple. You make more calls.

Here’s everything you need to know about the Do Not Call Registry and how to keep yourself safe from unwanted calls.

What is the Do Not Call Registry?

The Do Not Call Registry is a database maintained by the United States government that lists telephone numbers telemarketers are not permitted to call. You can be added to the list by visiting donotcall.gov and entering your phone number or by calling 1-888-382-1222 from the number you want to register.

The problem is, the FTC has no power to block calls, and the Do Not Call Registry is just a list that aboveboard domestic telemarketers abide by. Additionally, even if you're on the list, some types of calls are permissible. For example:

Register and say goodbye to spam calls? Not exactly

While the Do Not Call Registry deters many domestic telemarketers from operating outside of the law, it presents much less of an obstacle to robocallers abroad or those who just don’t care much for doing things legally.

Current domestic telemarketers generally follow the list and won’t call you if your phone number is on it. It’s in their best legal and business interest — if they were to violate the registry, they would face significant fines and could lose their licenses.

The Do Not Call Registry falls short, however, in an age where overseas scammers can mimic phone numbers and make thousands of calls per second with a computer. The registry is not tied to any technology or enforcement apparatus that can identify or block spam calls.

A 2020 Robokiller survey identified that 40% of respondents had registered for the Do Not Call Registry. Unfortunately, they’re likely receiving regular, if not daily, spam calls. That’s because the Do Not Call Registry only works when telemarketers or spammers abide by the law. The type of people willing to scam the elderly aren’t going to be too concerned with that.

The vast majority of unwanted calls you receive are illegal and will never be deterred or stopped by the Do Not Call Registry. Advances in technology have made it easy for scammers to evade roadblocks with tactics like caller ID spoofing (more on this below). They can use thousands of phone numbers to make their calls, and jump from one number to the next to avoid getting shut down.

Bottom line: The Do Not Call Registry is effective in some regards, but has limitations.

What is caller ID spoofing?

Caller ID spoofing enables scammers and spammers to falsify the information shown on caller ID, therefore disguising their identities and tricking people into answering the phone. Scammers have become technologically savvy enough to make it look like the call is coming from a local area code, a practice known as neighbor spoofing.

The point of neighbor spoofing is that you're more likely to answer a call if you think it’s from a legitimate local caller. If you've answered a call that appears to be from someone in your area code only to hear an automated voice telling you to buy a car warranty, it's neighbor spoofing.

Because spoofed calls are often placed from international locations and can be made from virtually any number, they’re very difficult to track. Millions of these calls are made every day.

Why do scammers use robocalls?

Spoofing is but one form of a robocall. The FTC says of robocalls:

"If you answer the phone and hear a recorded message instead of a live person, it's a robocall. If you’re getting a lot of robocalls trying to sell you something, odds are the calls are illegal. Many are also probably scams."

Unfortunately, robocalls are an easy, low cost, highly lucrative illicit proposition. Using internet calling services, calls that cost fractions of a penny to place can potentially return hundreds or thousands of dollars in stolen profits. Because scammers can make thousands of calls at once with cheap autodialing technology, it’s a thief’s dream.

Just how lucrative are robocalls? Scammers stole an estimated $30 billion using this method in 2021 alone. As a result, scammers keep making money and continue upping the number of illegal calls. The Do Not Call Registry doesn't stand a chance.

Consumers may receive calls from legitimate companies that violate the Do Not Call Registry. In the process, these organizations open themselves up to the possibility of fines and lawsuits. Consumers on the Do Not Call Registry who receive a robocall or telemarketing call from a U.S. company may be able to take legal action.* These lawsuits fall under the Telephone Consumer Protection Act (TCPA) of 1991.

According to ConsumerNotice.org, the largest class action telemarketing lawsuit in history was a $61 million verdict against Dish Network. Some people received up to $1,200 per call for illegal calls made by Dish in 2010 and 2011. On top of personal lawsuits, the U.S. government can fine companies up to $43,792 per illegal robocall or telemarketing call.

What about cell phone companies?

Your cell phone provider may warn you about the dangers of spam calls and text messages, but typically they can't do much to block these messages.

Things did take a positive step forward in 2019 when the FCC stepped in and tasked the telecommunications industry with curbing the number of robocalls Americans receive. A dozen phone companies and 51 state Attorneys General worked together to implement a technology to identify and block illegal calls. The result was STIR/SHAKEN, a protocol designed to verify that callers are legitimate. The protocol has shown promise but fallen short of eliminating the problem altogether.

The Do Not Call registry is limited in what it can do and falls short in resolving the spam call problem. That’s why it’s important to take matters into your own hands with technology that’s able to proactively identify spam calls and block them before they reach you, no matter where they originate.

Simply put, RoboKiller is the best solution for spam. The app uses machine learning and audio fingerprinting to accurately predict scam and spam messages. With a global database of known scammers, you’re automatically safe from bad numbers reaching you.

Plus, call screening enables you to find out who’s calling and why. When someone calls you, the app will ask for the caller’s name and reason for calling. Once they’re screened — and if they’re not identified as a scammer — you’ll receive this information. From there, you decide whether or not to pick up.

Then there’s arguably the most gratifying aspect of using RoboKiller: Answer Bots. These funny recordings intercept spam calls and make spammers believe they are talking to a human while simultaneously creating an audio fingerprint of the call. You can listen to the results afterward.

Other tremendous benefits of RoboKiller include:

The end of spam as you know it

Spam calls leave us all exasperated and annoyed. Even worse, they can result in your hard-earned money being stolen. The FTC's Do Not Call Registry is limited in its ability to stop malicious, unwanted calls.

That’s why it’s imperative that you download the award-winning RoboKiller app to your iPhone or Android. RoboKiller is the number one solution for stopping spam calls.