Midterm Elections 2018: The Age of the Political Mass-Text is Here 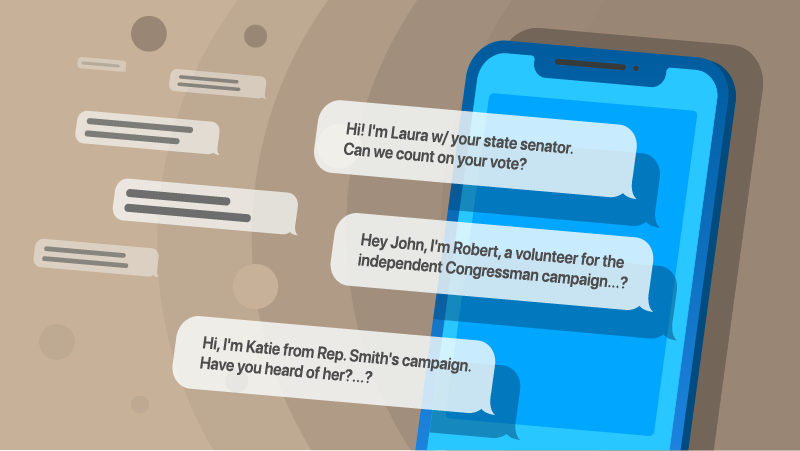 2018 midterm elections are in full swing, but there’s one stat you won’t find on Fox News or CNN: Candidates and their supporters are sending political text messages in droves.

‍Maybe you’ve already gotten one of them.

My first political text. This should not be allowed. "Hi! I'm Laura w/ NC Wins. In Nov, there is an important election for State Supreme Court. The Democrat, Anita Earls, will be an independent voice on the court. Do you plan to support Anita?" — Alto (@bellabann) September 19, 2018

The sad reality is that politicians are turning to text messages because their other options for communicating with voters are drying up.

People have become immune to TV ads. Facebook’s changes have made it difficult to spread political messages (thankfully!). And people are trying their hardest to ignore unwanted robocalls, political or otherwise.

It makes sense that candidates from all sides are turning to texts messages to get voters’ attention.

At RoboKiller, we believe you should only get calls you want. The same goes for text messages.

In this post, we’ll show you what these texts look like, how campaigns are sending them to the masses, and even share the best way to keep them out of your text message inbox.

What are political text messages and who is sending them?

We feel the same way, Hannah.

It’s bad enough that politicians have made themselves immune from the Do Not Call Registry. But now campaigns are supercharging the reach of their campaign messages with politically-charged texts.

Pairing text messages with politics isn’t new. Almost ten years ago, Barack Obama announced Senator Joe Biden as his VP candidate by texting his campaign supporters. In 2016, both Hillary Clinton and Donald Trump used text messages for fundraising and to get voters to actually vote.

As 2018 midterm elections are heating up, political text messages have taken a disturbing turn!Not only are candidates using text messages more frequently, but they’re also mass-texting seemingly random people who didn’t opt-in to receive these messages.

Between unsolicited candidate information and blasting voters through “peer to peer” texting (we’ll talk more about this below), candidates are sending out campaign messages without opt-ins from these people and sometimes without even knowing which political party a person is registered with.Here are just a couple examples of unsolicited campaign texts:

Hi :) Im Kate, a volunteer w/ Gayle McLaughlin, the Our Revolution, corporate-free candidate running for Lt Gov of CA. Have you heard of her?

Hi Robert, I’m Carmen, and I’m a volunteer with James Thompson for Congress campaign. I am texting to make sure you received your absentee ballot if you asked for one. Did you get your ballot ok?

A text message from a candidate you support may not annoy you. But for the rest of us, these text messages are a violation of personal privacy and are more aggravating than junk mail, sponsored Facebook posts, and TV ads combined.

The only thing worse than political ads on television or radio is political text messages. Contacting me directly on my personal phone is not okay. — Blake Follis (@BlakeFollis) September 30, 2018

One major contributor to the political spam texting problem are peer-to-peer texting apps. And campaigns are loving them.

Peer-to-peer texting apps allow campaigns, with a handful of volunteers, to text thousands of individuals, manage conversations, and respond to replies.

At first, this doesn’t sound sinister. Until you dig deeper and discover that campaigns purchase extensive lists of voter data from political groups, including phone numbers, and upload them into peer-to-peer texting platforms. As a result, politicians supercharge their ability to blast out text messages to unsuspecting people.

According to CallHub, a company that creates political robocalls, peer to peer texting, and text broadcasting software for campaigns: “Peer to peer texting lets organizations send text messages to people with the help of agents. The campaign manager uploads the contact list and assigns a batch of contacts to each agent, who then reach out and engage people in one-to-one conversations. Each agent can send out around 1500 texts in the span of an hour…” At 1,500 texts per hour, just 7 agents, aka campaign staff and volunteers, can text more than 31,000 people in 3 hours. CallHub goes on to say that, “Since agents are manually hitting the send button for every text, with texts going out from a ten digit number, p2p texting stays compliant of texting regulations.”

Compared to robocalls, the government has done an excellent job protecting consumers from automated text messaging from businesses. Companies are only allowed to send texts to customers who opt-in.

However, peer-to-peer texting platforms bypass regulations by using agents to send each text.

Because political peer-to-peer text messages can come from a large number of agents, identifying political spam texts and blocking specific numbers is like playing whack-a-mole.Except there aren’t prizes and the game doesn’t end. Just endless whacking.

So, if accumulating a list of numbers to block isn’t going to stop political text messages, what will?

Q: How do I stop political text spam? A: SMS filtering

It doesn’t appear a solution is going to come from government regulators anytime soon. And don’t count on campaigns using more restraint.

SMS filtering blocks text messages based on content, not just the number. When you enable SMS filtering and we see a message that matches our known spam criteria, we filter it out to keep it from wasting your time, no matter what phone number it came from.

The only exception is texts sent from your contacts. Those will always get through. Although if your contacts are sending you political spam messages, we recommend finding new people to talk to.

SMS Spam Filtering is available in iPhone and coming to Android in the future.

Don’t count on a Do Not Text Registry anytime soon

How do I get taken off all the political text message spam lists? This is getting really annoying. — Will Sargent (@will_sargent) May 19, 2018

You might be asking yourself, isn’t there something the government can do to protect people from being blasted with peer-to-peer political texts?

According to the FCC, political text messages to cell phones aren’t given any Do Not Call Registry exemption. And, they can only be sent with the prior express consent of the recipients.

However, as mentioned earlier, this only applies to texts that are “blasted” to a list of phone numbers. Peer-to-peer texting has cleverly bypassed this rule because people can technically reply and carry on a conversation with “agents.”

Is there anything the government can do to stop this?

The odds are not in your favor here. Congress has already given themselves immunity from the Do Not Call Registry. Additionally, politicians are the ones pushing the popularity of politically-charged peer-to-peer texting. It's unlikely any legislation or system will be instituted to put them in check for the foreseeable future.

The only real way to prevent them is to use advanced SMS filtering like the kind RoboKiller now offers.

Try it yourself. Start RoboKiller today.