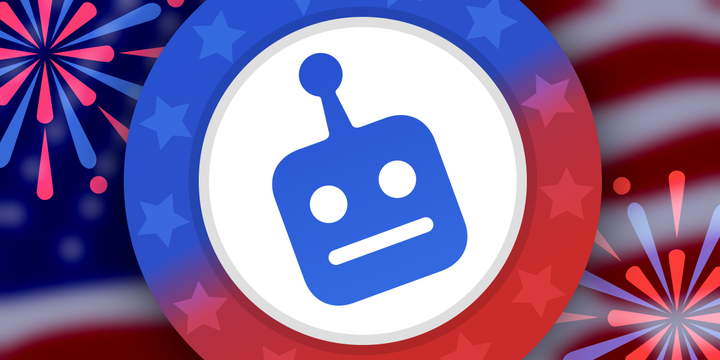 Politics are a sensitive subject these days, and not just because of your crazy uncle’s Facebook rants.

If you somehow manage to keep politically-charged conversations away from everyday life, get ready for them to barge their way in (if they haven’t already).

Candidates and their supporters have implemented a new strategy to get their campaign messages to us directly… political robocalls and political text messages!

‍Not all politicians use them, but if you don’t want to receive political robocalls (most of us), you aren’t even given an option to easily unsubscribe. That means if you want to stop political robocalls, you must take matters into your own hands.

In this post that we’ve updated for the 2018 midterm election season, you'll learn how you can fight back against the flood of annoying, unwanted political calls from every side of the aisle.

Can I opt out of political robocalls?

If you're like most people, you don’t want politics interrupting your family dinner or coffee shop conversation. And you definitely don’t want them barging into your life whenever they please. But that's becoming hard to do in our current political climate, and especially as political robocalls and robotexts are increasing.

But, just because political robocalls are legal, does not mean that you want to receive them or cannot stop them from reaching your phone. As you’ll learn later in this post, there are limited ways to opt out of receiving unwanted political spam calls and text messages—unless you take matters into your own hands.

Can the Do Not Call Registry stop political robocalls?

That's because they fall under one of three types of robocalls that are considered legal by the U.S. government. Essentially, politicians have given themselves the right to call you without giving you a way to opt out.

This is primarily because the Do Not Call List, a national list of mobile and landline phone numbers that have opted out of receiving legal telemarketing calls, does not protect its registrants from unwanted political robocalls. What does that mean for you? If you don't want to receive political spam, registering your phone numbers on the Do Not Call List will be entirely ineffective.

The good news is that political robocalls can be stopped, once you get over your anger and frustration at the government for allowing this annoyance and control over your telephone lines. The best solution to stop unwanted political calls is to download a robocall blocker app such as RoboKiller. Robocall blocker apps allow you to manage which calls you consider spam, and always know who is calling when your phone rings.

Text messages are the new way candidates spread their message

How do I get taken off all the political text message spam lists? This is getting really annoying. — Will Sargent (@will_sargent) May 19, 2018

We're with you, Will!

Sadly, candidates and their supporters have begun using texts to spread campaign messages, encourage people to vote, and even spread information (and misinformation) about their campaign challenger. What's worse is that sending political text messages is a totally unregulated communication channel (as of September 2018).The message may vary, but they look something like this:

Because text messaging is a new frontier for campaigns, there's no regulation. However, because robocalls are legal for political campaigns, text messages will likely follow suit and be usable by campaigners.

That means the best way to stop these is to find a call blocker that also offers SMS Spam Filtering.

Downloading an app like RoboKiller to block political robocalls on your smartphone is the most effective solution to dealing with your robocall problem because it puts the power in your hands. You determine what calls you consider to be spam and what numbers are allowed to reach your phone.

Not only do robocall blocker apps give you the power to determine what phone calls you believe to be spam, they create a nationally sourced database of prominent phone scammers and phone criminals. If every single mobile phone owner used a robocall blocker app like RoboKiller, you’d know exactly who was a spam caller every single time the phone rang. Spam and robocallers wouldn’t stand a chance!

Though it’s frustrating that spam political calls seem to be the exception to many robocall laws and regulations, downloading a robocall blocker app such as RoboKiller will remove the politics from the relationship between you and your smartphone.

How to stop political spam calls on your smartphone

RoboKiller is the best solution to stop unwanted political robocalls for good and even lets you to take the fight to political campaigners! Beyond offering the most effective spam call protection, real-time caller identification, and block/allow list functionality, RoboKiller also allows you to get revenge on spam callers using Answer Bots, hilarious pre-recordings that keep spam callers on the phone for hours. What better way to fight off robocalls from your opposing party than with robocalls of your own?!

‍RoboKiller is an easy investment to ensure your privacy and personal information is protected from annoying spam calls and political robocalls. Join the fight to stop spammers for good, all while enjoying a smartphone free from political spam!

Click here to get started with your free trial of RoboKiller!