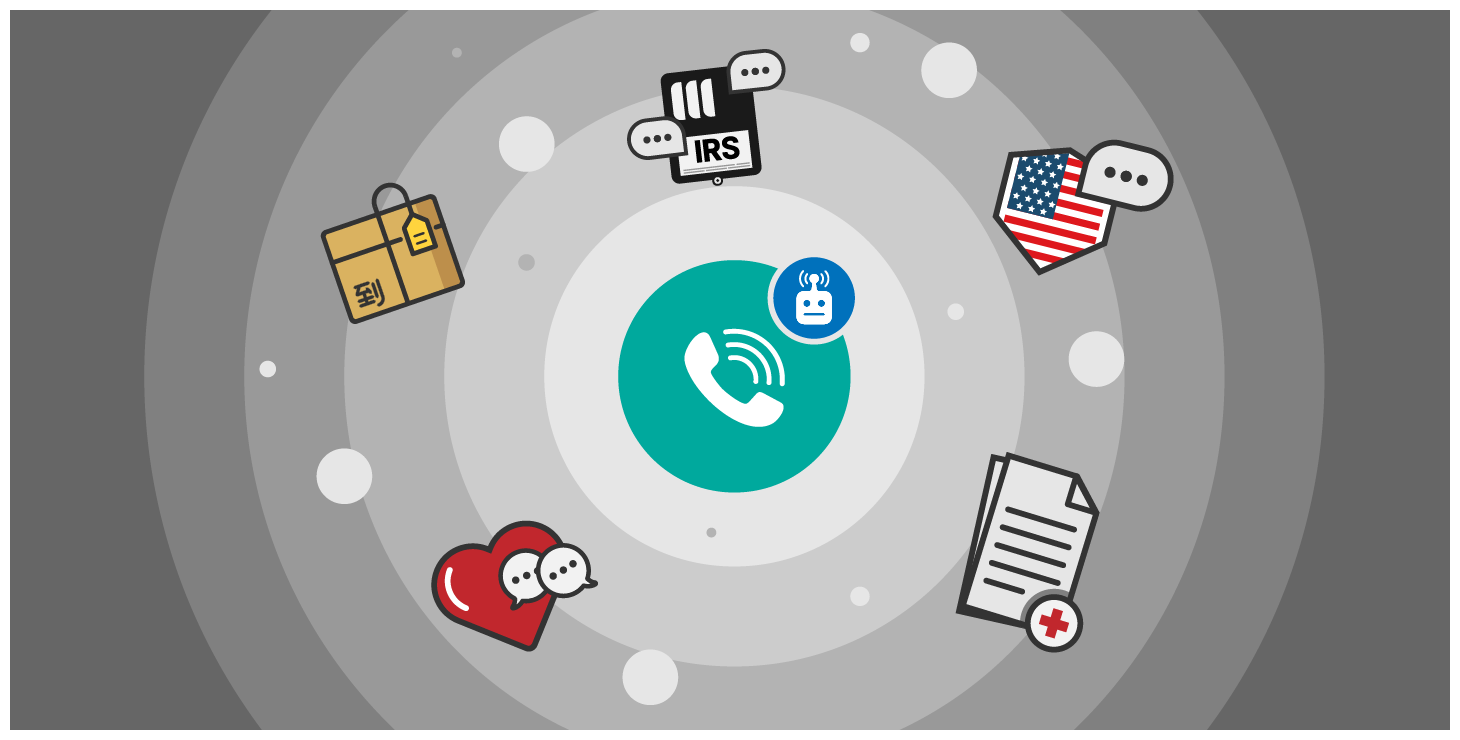 Phone scams are on the rise.

Anyone who has picked up their phone lately knows there are more spam calls than ever before.

Right now, phone scammers are making thousands of calls, luring unsuspecting victims into handing over their valuable info. With nearly 95% of the U.S. owning a cell phone, phone scammers treat Americans like a buffet. Unless something changes, phone scams will continue to be a part of everyday life (more on that later).

In this post, we’ll take a look at some of the top phone scams that have surfaced in 2018 and the steps to take to protect yourself.

If you’ve received a phone call in a language you couldn’t understand, you may have unknowingly been part of these Chinese robocalls.‍

NPR reported in the spring of 2018 that many in the New York area and other large metropolitan areas that have sizable Chinese immigrant populations have been victims of this phone scam. Even though it’s in Mandarin Chinese, it’s still affecting your community.

‍This phone scam is what’s known as a “parcel scam.” The caller pretends to represent a courier company and says that a package that was supposed to go to the victim was involved in criminal activity and that they must pay up to millions of dollars to get it back. Sometimes the calls even transfer the victim to another scammer pretending to be a police officer. This fake police officer tells the victim that they must route money to a bank in Hong Kong for the case to be resolved.Of course, this is not true.

This scam has occurred in New York, Boston, and Houston and has resulted in losses of millions of dollars already.

We’ve mentioned this one before, and it’s especially egregious. It takes advantage of people who are sympathetic to the needs of veterans and appreciate the sacrifice veterans made to protect freedoms in the United States.

It also takes advantage of veterans by misusing their needs and causing people to doubt the legitimacy of veterans' charities.

‍Spam callers will dial you and say they’re raising money on behalf of a particular veteran charity. The name will sound like a real charity or almost exactly like a real charity. The scammer will ask victims to donate to help veterans in needs, especially to veterans’ medical care for their families. But this isn’t often the case. Very little money or none at all ever gets sent to veterans.

A USA Today report names one particular robocall phone scammer named Veterans of America as illegally making millions of phone calls to get people to donate their personal valuables—like cars and boats—to veterans. But in reality, its founder would sell those things and then use the money for himself.

The Federal Trade Commission and attorney generals in several states are taking action against these phone scammers and illegal robocalls. However, you should still be vigilant when you are asked to donate.

Unfortunately, fake veteran charities aren’t the only ones out there making bogus claims in the name of charity.

People claiming to be from a nonprofit organization like the Make-A-Wish Foundation have used robocalls to scam people from their hard-earned money.

‍In these cases, the robocallers will say that the victim has won a considerable sweepstake from the Make-A-Wish Foundation and that they must pay extra money to cover insurance and taxes on the prize. They’ll then ask the victim to wire money and send banking information, which means that the money is gone forever. The FTC says that anytime you have to pay to get a prize, it’s a scam.

This phone scam is specially designed for a very vulnerable population—senior citizens. Why? Because they are more likely to answer their phone and are often more concerned about their health.

This scam isn’t new, but as health insurance laws have changed in the last few years—and continue to evolve—phone scammers are preying on Americans’ fears.

‍‍A “health care representative” will make a call to the senior and claim that there’s an issue with their Medicare or Medicaid plan or that they need to enroll in a new plan due to Affordable Care Act changes. However, if you’re enrolled in Medicare or Medicaid, you don’t need the Affordable Care Act. The callers are using this confusion to their advantage to try and ask the seniors for their banking information to enroll them in a new plan.

Although some of these fraudulent calls are made by actual people, several robocalls will make calls to a list of seniors and bait them into giving up their health insurance ID numbers or bank account information that will then be used in other frauds.

Ok, so this scam isn’t new at all, but it’s so prominent we felt like mentioning it again.

The Internal Revenue Service (IRS) is in charge of our taxes year after year, so it makes perfect sense for someone to be concerned about a call from someone claiming to be from the IRS.

Just keep this in mind: The IRS almost never calls citizens and will not threaten to have law enforcement arrest you.

‍You’ll receive a call from someone claiming that you’re trying to defraud the IRS by not paying your taxes or committing tax fraud. The scammers use a robocall telling you to call them back immediately so they can pull up your “case file.” However, when you call back, the scammers will often hang up if you ask too many questions about speaking to a supervisor, an identification number, or more paperwork regarding how you’ve defrauded the IRS.

If they ask for immediate payment or threaten to call the legal authorities, it’s a phone scam. The IRS will definitely mail you a bill and wouldn’t send the police after real criminals in that way.

The general rule of phone scams: If someone asks you to pay them through an iTunes gift card, Western Union money transfer, or any other payment that’s untraceable, it’s more than likely a scam.

What can you do to protect yourself (and others) from phone scams?

The thing is, phone scams exist because they work. The only way to stop scammers from bombarding Americans with robocalls and neighbor spoofed numbers is to shut down their ability to make money. And that’s no easy task.

Here are four ways you can protect yourself, including one that helps stop scammers for good.

We know it can be difficult to do, especially if the scammer is using a phone spoofing technique to make it look local. But if you’re not familiar with the number, let it go to voicemail and then check to see if it’s worth your time.

Try to learn more about the organization or company the phone scammer is supposedly representing before giving away any of your personal information. If you’re suspicious, ask for ways to follow up with them before giving away your Social Security Number, bank account information, or home address.

3. Report the calls to the Federal Trade Commission

Getting on Do Not Call lists won’t always protect you, so you’ll need to take another step. Go to https://complaints.donotcall.gov and file a complaint about a specific number.

4. Get the Robokiller app

The only real way to stop phone scams for good is by using a third-party app like Robokiller, whose advanced technology identifies spam calls and possible phone scams before they ever reach you. Robokiller uses a global block list and neighbor spoofing identification to avoid scammers trying to reach your phone.

Remember when we said phone scams will continue to be a part of everyday life unless something changes? RoboKiller is driving real change.

Or, more specifically, Answer Bots are. These are bots fight on your side by answering spam calls for you and wasting scammers' time. The results are hilarious, but they also serve a bigger purpose. When scammers are busy talking to an Answer Bot they think is a human, they aren't talking to other potential victims.

By keeping scammers occupied with Answer Bots, RoboKiller is putting them out of business and putting an end to phone scams.

Get started with Robokiller on iPhone and Android.