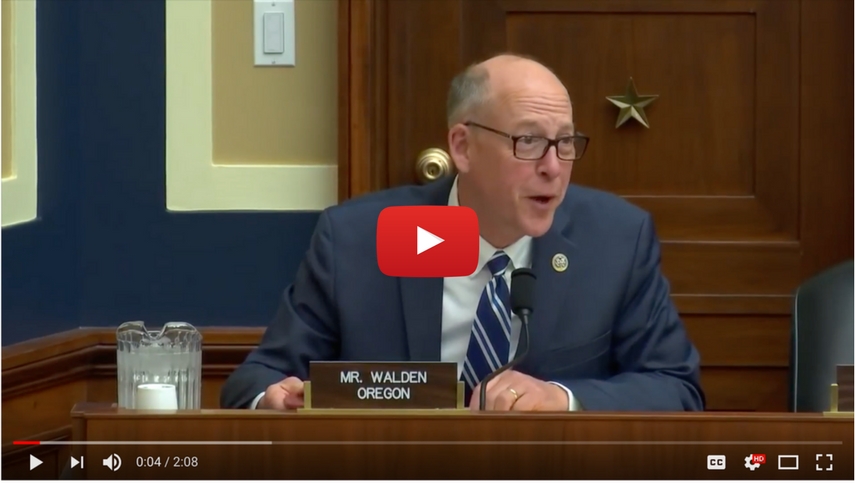 "I am going to be in the ‘get-even mode’ here real soon with these spammers." — Congressional Rep. Greg Walden (R-OR)

That “get-even” desire is one many of the 292 million U.S. cell phone owners share, including Congressional Rep. Greg Walden (R-OR).

Last week, our Chief Product Officer, Ethan Garr, testified as a witness during the House Energy and Commerce Committee's subcommittee on Digital Commerce and Consumer Protection hearing about the ways consumers and government can combat robocalls.

Two key events occurred during this hearing, including a surprising moment when a representative downloaded RoboKiller during the hearing, and a bold prediction about the end of robocalls.

What happened during the hearing

Calling the robocall problem an epidemic isn’t a shock to anyone with a phone.

Even hearing that members of the House of Representatives share experiences of getting spam calls isn’t surprising.

What was shocking was when Rep. Walden downloaded RoboKiller during the hearing.

What prompted this? The simple answer: Everyone wants to get even with spammers.

Each time RoboKiller blocks a spam call for our users, Answer Bots turn the tables on spammers to waste their time. And they are smart. They know how to press one to reach the human behind “Rachel from Cardholder Services.”

That’s time that they no longer have to scam and steal from our users or anyone else.

Getting even feels great and disrupts spammers’ business

At RoboKiller, we passionately believe that disruption of the telemarketers’ business is the key to solving the phone spam problem.

The phone scammer business model relies on making thousands of calls, knowing that only a small percentage will get answered, and an even smaller percentage will connect human telemarketers with viable targets. A relatively small pool of humans, often on the other side of the world, are waiting for their auto-dialed robocall systems to connect and someone’s grandmother to say “hello.”

Answer Bots are the solution to the robocall epidemic.‍

Yes, it feels great when they waste spammers’ time. Yes, the recordings are hilarious to listen to. But wasting a spammer’s time attacks them where it hurts—in their wallets.

By June 2021, RoboKiller will have 10 million users deploying hundreds of millions of our time-wasting Answer Bots. When that happens, spammers' revenue will drop by more than 50%, enough of a disruption to their bottom line to put them out of business.

The Do Not Call List doesn’t scare illegal operations

Unfortunately, the government cannot shutter the robocall problem with legislation.

The Do Not Call Registry did precisely what it was supposed to do but stopping the tiny percentage of legal robocalls that fall under the Do Not Call list purview is almost no help to consumers who are experiencing an onslaught of unwanted calls.

It doesn’t require much for a three-man IRS scam operation in another country to start making thousands of calls per day. They aren’t worried that the American Justice system will ever knock on their door.

Other call blocking technologies are making the problem worse

Most other call blocking companies approach the problem from the Caller ID angle, but spoofing, caller ID blocking, and other tools limit the value of that approach. It is a cat and mouse game that can never be won.

Sure, our competitors are helping their users, but they are also helping scammers. Telemarketers are happy to skip a well-educated executive with a call blocker app to get to the elderly grandmother who they know is a more likely to fall victim to their scam. RoboKiller users are helping everyone.

Answer Bots inanimate identities cannot be stolen. They have no wallets to be infiltrated. They can keep spammers wrapped up on calls for hours, and they are protecting you even if you don’t have RoboKiller.

Every minute our Answer Bots are engaging telemarketers is a minute they don’t have to speak to anyone else. That kind of disruption is the key to making the robocall epidemic a thing of the past.